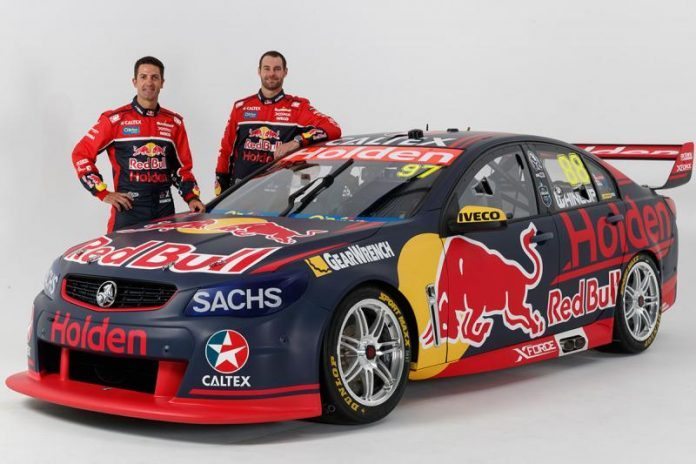 Six times Supercars Champion Jamie Whincup is eagerly awaiting the start of the 2017 season where he is hoping to usurp his young teammate, Shane van Gisbergen for title honours.

Speaking to Motosport.com, the Aussie racer explained that he just as much confidence as ever and he knows he can do what’s necessary to be back on top at the end of the year…

“I had a good off season, got away from it, recharged the battery,” he said. “I’m always motivated. I always go into the year with confidence knowing I can do the job. Last year, I’m not sitting here going ‘that was a disaster’. There was so much good about 2016, and there was a few big points losses in the middle that hurt. Apart from that we represented ourselves well, it just wasn’t our year. Hopefully this year is. Anyone in the game knows what happened in 2016. But that’s all part of the gig, trying to stay clean and be on the right side of the 50-50s.”

Like his teammate, Jamie was very impressed with the new car and can’t wait to get back into action at the season opening Clipsal 500 in March.

“This year’s livery is great, and I think it’s a fresh feel for the team, I can’t wait to see how it looks on track.” Jamie Whincup, who has won four of his six championships as a Holden driver, said at the launch of the Red Bull Holden Racing’s new car launch. “I’m pumped, it’s a great atmosphere here today. It’s a good feeling to know we have the support of Holden and Red Bull as we come into a new era of the sport next year. It’s an exciting time to be a part of the Supercars category, there is plenty of development on the horizon."