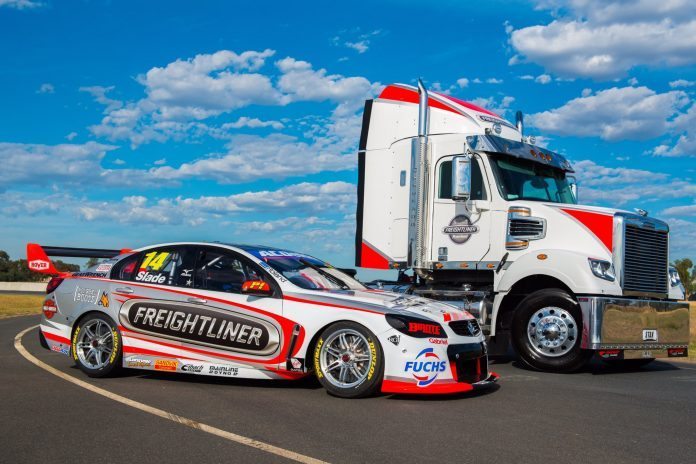 Tim Slade and Freightliner Racing joined the ever growing list of teams debuting their new cars this week when they unveiled their new Commodore with a new bright white and silver livery, a complete contrast to last year’s black and red number.

However, that doesn’t mean there is no red whatsoever, but it is a different shade of red that is expected to stand out a lot more than last year’s colour scheme.

“The Freightliner Racing Commodore looks awesome,” Slade said. “It’s so different to what the car has been over the past few years, we’ve had the design locked down for a while now and I’m excited to finally show it off to our Freightliner Racing fans.”

2016 saw Slade’s resurgence where he claimed his first back to back race wins and finished in the top ten in the championship. Now, he looks to build on that in 2017 and is more than ready to take the fight to the top echelon.

“We didn’t put too much pressure on ourselves last year, we always wanted to do well and aim for the top ten. We achieved some great results, and this year we’ll be looking to build on that and be more consistent with our speed and good results,” he explained.

Freightliner Racing also revealed its new Freightliner Coronado transporter. Going by the name ‘Stax’ the transporter is well known by Supercars fans for the remarkable photos it stars in when travelling to and from Supercars events.