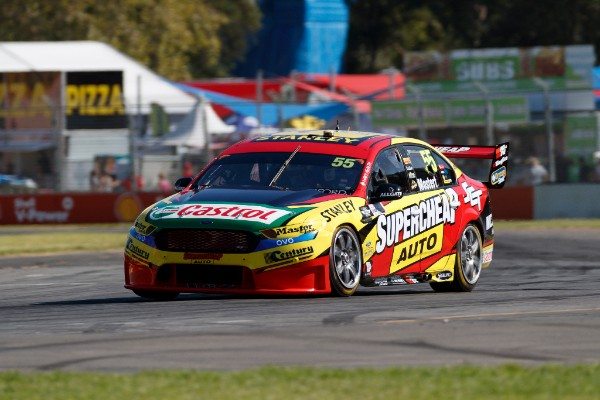 It may be pouring with rain in NSW and Queensland today, but the heat will be an unwelcome guest for the teams and drivers for the opening race of the 2017 Supercars Championship at the Adelaide Parklands Circuit today.

For Prodrive, the heat on Friday didn’t deter three of their four drivers from making it into the top ten shootout, which will be held later this morning local time.

This means they have a three out of ten chance of securing the coveted first pole position of the season.

Chaz Mostert was the highest placed of the team’s four drivers with a fifth placed finish in Fridays qualifying session, his run to fifth-place set at the end of the 20-minute session, with further changes being made to the car in qualifying. Despite recording a promising time, Mostert and engineer Adam De Borre both insist there is room to improve with setup…

"It's encouraging to see three of our cars into the shootout and good to have a good start to the year,” Chaz said. “We're all out there trying new things and my car is different to the other guys' and their cars are probably different to each other's as well. It's good that the car can work in different settings. We're obviously trying to fine-tune what is best for each driver but there's still a bit of work to go. I'm not completely happy with the balance of my car. Neither is my engineer so we're going to work hard tonight to try and make it even better again for tomorrow but very lucky to do a quick time at the end there to get us in the 10."

The level of competition has again increased in 2017 with Winterbottom and Waters' times separated by just 0.0001 of a second.  Winterbottom will take advantage of todays final 20 minute practice session to tune the car to his liking as his relationship with new engineer Brendan Hogan develops.

"We're still playing with the car,” Frosty said. “When you have new engineers and drivers together it always takes a little bit of time to fine-tune. The key was to get in the shootout because now we get a practice session tomorrow to go again. We need to make the car better. It's not doing what I want it to do but at the same time that qualifying lap I was pretty happy with because I knew it didn't have anything left in it so that was as good as it could do, we got in the shootout and we'll keep progressing. We're enjoying it, we've just got to find that little thing that works and it's not too far away."

Cameron Waters has further cemented his position as a competitive driver on the streets of Adelaide, qualifying ninth in a promising display of form.

"I'm really happy to get in the top 10,” he said. “That was our goal for the day so to do that is really cool. We had a bit of a setback in practice two when I  hit the tyre bundle and didn't get a run on green tyres but Brad (Wischusen) did an awesome job of tuning what we had and it ticked the box of getting into the shootout. We'll try and make it better again and give it our all."

"It was a tough one,” he said. “We had a bit of a tough start to the day with some problems with the anti-roll-bar so I felt a little bit behind the eight ball because of that. To be honest I didn't really feel like I drove the car like it needs to be driven today. It's such a different car to what I've been used to. It makes time in different areas and I felt like we should have been a bit better. On the last set of tyres we were probably on for a much better lap but I had a mistake at turn 10, so it would have moved us up a little bit but not into the top 10. It'll come. It's such a different car to what I'm used to so it'll take a little while."