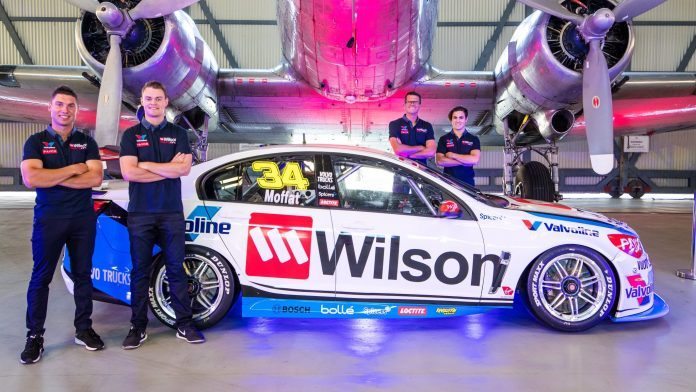 The new Garry Rogers Motorsport Commodore was unveiled in Melbourne this afternoon with regular driver, James Moffat and Garth Tander proudly on display.

The 2017 Supercar season sees GRM returning to racing Holden’s, a disappointment for team boss Garry Rogers, however there was very little he could do to keep Volvo on board….

“I am disappointed that we couldn’t find a resolution with Volvo that would see us race the S60 and this disappointment is more for my people who put so much time and effort to design and build such a competitive car. They should be all very proud of their achievement with what they did in such a short period of time with the Volvo,” he said.

“Of course the past 3 seasons with the Volvo and particularly Scotty will in years to come provide me with many fond memories, but so do the late ‘90’s and early 2000’s when we were competing head to head with the HRT powerhouse and winning Bathurst.”

The opportunity for the team to continue doing what they do best is provided by those who support them….

“It is really pleasing to be here at Essendon Fields where our naming right sponsor Wilson Security has recently relocated their head office. I have said it previously but the loyalty and faith in my team that the Wilson Group, PAYCE and Valvoline have displayed really motivates all at GRM,” Rogers added.

“Again, over the past 20 years there have been some tremendous highs, disappointing lows and plenty of in between. I certainly look forward to the roller coaster of emotions throughout 2017.”