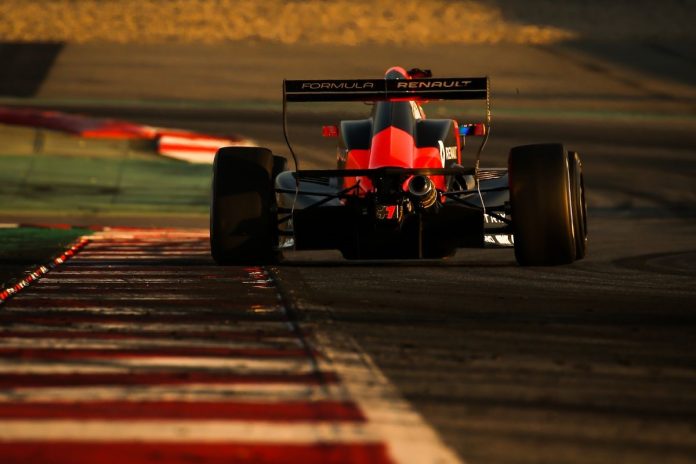 The 2017 season was Tech 1 Racing’s eighth campaign in the Formula Renault Eurocup.

Once again, the team managed by Simon and Sarah Abadie, scored several victories thanks to Gabriel Aubry and Max Fewtrell while the efforts made by Thomas Maxwell and Thomas Neubauer helped contribute to the satisfying overall result of the team before it tackles the upcoming 2018 championship season!

Ever since the 2010 Championship, Tech 1 Racing has won the teams’ title four times in Formula Renault. This year the Toulouse-based outfit invested its hopes in Gabriel Aubry accompanied by three rookies, Thomas Maxwell, Max Fewtrell and Thomas Neubauer to combine experience, youth and talent.

Tech 1 Racing scored four victories in the Formula Renault Eurocup thanks to the two drivers spearheading its attack, Aubry and Fewtrell. In the rookie category the Briton from the Renault Sport Academy clinched eight wins, 16 top-3 finishes and six fastest laps!

The team completed these results with two pole positions, one fastest lap in the race, nine top-3 finishes and a total of 40 top-10 finishes to which can be added 17 top-3 finishes in the rookie category thanks to Fewtrell’s consistency and Thomas Maxwell’s very impressive comebacks.

Among Tech 1 Racing’s highlights of the year was Aubry’s double at the Hungaroring on Sunday as well as his victory at Spa-Francorchamps. Despite being unlucky as he was often the collateral victim of his rivals the Frenchman showed just how he had improved like Fewtrell, winner at the Red Bull Ring and rookie champion. The work done with the Thomases Maxwell and Neubauer gave the two youngsters the opportunity to show real promise for the future.

Tech 1 Racing’s appearances in Formula Renault NEC were also very fruitful. The team from Toulouse scored two doubles at Monza after which  Aubry clinched a top-3 finish at the Nürburgring. Thus, the Frenchman was in the running for the title up till the last event despite missing two meetings compared to the regulars in the championship!

Since the start of the month Tech 1 Racing has been heavily involved in its winter test programme, which it kicked off with the fastest time in the rookie tests on the Barcelona Montmelo circuit. In 2018, the aim will be the same – reconquer the European crown! 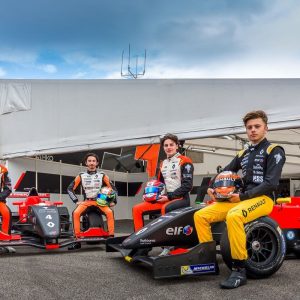 “Overall, our 2017 season has been a pretty satisfying one,” summed up Sarah Abadie, the Tech 1 Racing team manager. “The final result could have been better, but even so we finished third in the championship with only one driver back for the second year. At the beginning of 2017 many people openly laughed at us when we said we’d be gunning for a top-three finish overall with Gabriel Aubry, but we always believed in him as he’s a hard worker who demands a lot from himself. We knew it would pay off in the end. We’re just sorry about the big points that we lost in collisions for which he wasn’t responsible. It cost us dear, but Gabriel is now a much better all-round driver than he was a year ago.

“In parallel we achieved our aim with Max Fewtrell: the rookie title. He confirmed just how good we thought he was by combining speed and consistency throughout the season. His title underlines yet again the work we do to bring on young drivers. It was also the case for our two Thomases even if the results are less flattering in terms of points. We’re the first to be disappointed, but the former had problems in qualifying despite an interesting race pace. And last but not least we knew that moving up from karts to the Eurocup was a huge challenge for Thomas Neubauer. He often showed real promise and sometimes was not blessed with success. We really hoped that his efforts would pay off and that he’d be able to get it all together to score points at the end of the year. In any case Thomas now has gained solid experience if he decides to come back in 2018

“We would like to thank all those who contributed to the success of the team this season” added Simon Abadie. “Our thanks to the drivers for their all-out involvement alongside the engineers and mechanics throughout this long campaign in one of the most hotly-contested championships in the world! They never gave up and their cooperation was exemplary. We would also like to thank our partners without whom nothing would be possible. Now it’s up to us to correct out errors and build on our strong points to do better in 2018.”