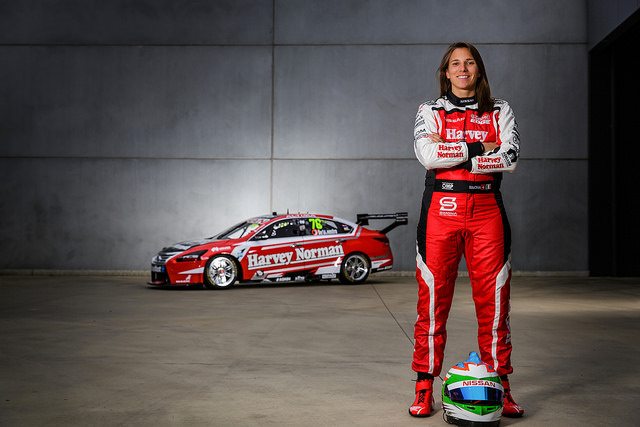 The launch of the 2017 Australian Supercars Championship was the scene of Simona De Silvestro’s unveiling of the #78 Nissan, complete with Harvey Norman branding.

Harvey Norman has sponsored Simona in her Bathurst 1000 events in the past few years, however the new cars striking red livery displays quite proudly that the retail giant is throwing their weight behind her debut season in the sport and beyond.

“The car looks fantastic. Red goes faster, right?” remarked De Silvestro. “It’s great to show off the Altima I will be racing this year, as well as announcing that Harvey Norman will be supporting me. Harvey Norman was with me at the last two Bathurst 1000’s, so it’s great to have them onboard again.”

“Everyone has been really welcoming to me since I arrived, so I can’t wait to get racing. We have started our testing program, and I’m feeling really comfortable in the car and with the team. This season will be challenging, as it’s my first full year driving the Altima. But I have a great team around me, and I’m really looking forward to going racing at the Clipsal 500.”

"It will come as a surprise to no one that Harvey Norman have committed to a three year partnership with Simona De Silvestro in her Supercars driving campaign for Nissan Motorsport,” said Harvey Norman CEO Katie Page. "Simona has raced Formula-E, IndyCars and has had a taste of driving Supercars as one half of the Harvey Norman Supergirls Wildcard team at Bathurst. We know she is seriously talented.”

"Harvey Norman seek out exceptional athletes - women who excel in their chosen sport; are driven to succeed; train both mentally and physically to be the best and make a contribution to their sporting community. On every measure, Simona is that athlete. I can't wait to join 250,000 other fans and watch Simona race in the Supercars season opener next month at the Clipsal 500."