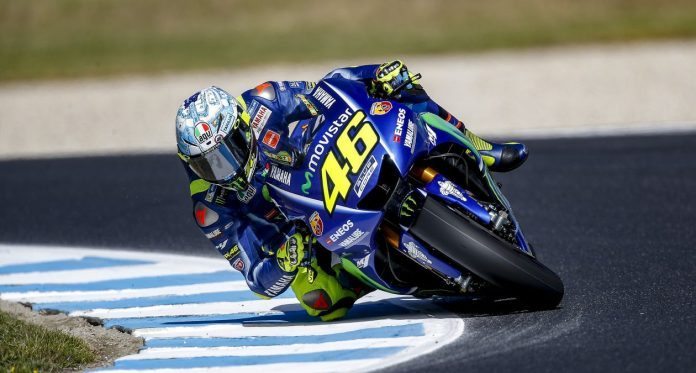 Yamaha MotoGP Team‘s Valentino Rossi reported for duty today at the start of the Phillip Island MotoGP Official Test in Melbourne Australia, the Italian back on track to build on the results from the three-day Sepang test a few weeks ago.

Rossi didn't waste a second to make full use of the testing opportunity at the Phillip Island Grand Prix Circuit. He slotted into third place in the timesheets early on in the test and got down to work. He fine-tuned his bike‘s setting in the morning to deal with the strong winds at the Australian coastline, improving his pace.

The Doctor completed 77 laps, which he used to assess the frames and fairings as well as various other small details for his YZR-M1‘s set-up. Though his focus was on comparing the test items, he still found time to put in a time attack at the end of the eight-hour session. The Italian wrapped up the first day in second place with a best lap time of 1‘29.683s, just 0.186s from the front.

“It was a good day, I‘m quite satisfied,” Rossi said. “We started in a difficult way this morning. Before the break I wasn‘t strong enough and because I couldn‘t push at the maximum I didn‘t have a lot of feeling. We worked well during the break and in the afternoon the situation changed, I was a bit better."

"At the end, with the new tyre, I was able to do a good lap and second position is positive for the first day. For sure, we still have a lot to do, especially on the long distance and we hope to have good weather also in the next few days”