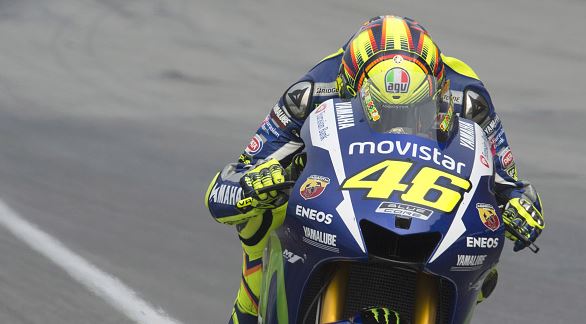 Italian Valentino Rossi will start from the back of the grid in the final round of the MotoGP, after being penalised for running Spaniard Marc Marquez off the track in Malaysia.

On 25th October 2015 during the MotoGP race of the Shell Malaysia Motorcycle Grand Prix, rider #46 Valentino Rossi deliberately ran wide on Turn 14 in order to force another rider off line, resulting in contact causing the other rider to crash.

This is considered to be irresponsible riding causing danger to other competitors and is therefore an infringement of Article 1.21.2 of the FIM Road Racing World Championship Grand Prix Regulations.

Valentino Rossi was requested to attend a Race Direction hearing. Both riders involved were present at the hearing, both gave testimony, and video evidence was reviewed.

The decision of the Race Direction is to impose on rider #46 the addition of 3 penalty points on your record, according to Article 3.2.1. of the FIM Road Racing World Championship Grand Prix Disciplinary and Arbitration Code. Valentino Rossi lodged an appeal with the FIM Stewards against the decision of the Race Direction. He was requested to attend another hearing with the FIM Stewards.

The FIM Stewards unanimously confirmed the Penalty Imposed by the Race Direction.

According to Art. 3.4.2.2 of the FIM Road Racing World Championship Grand Prix Regulations no further appeal may be lodged when FIM Stewards confirm the previous decision of the Race Direction.

Since the rider already had 1 previous penalty point, the sanction for accumulating 4 penalty points is to start the next race from the back of the grid.

Thus Valentino Rossi will start the Gran Premio MOTUL de la Communicat Valenciana from the last position of the grid.