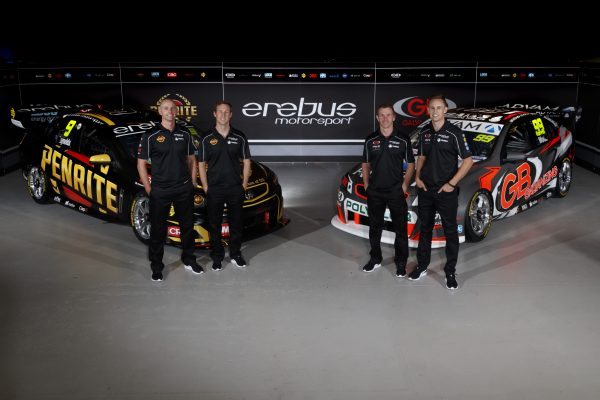 Erebus Motorsport has joined the long list of V8 Supercar teams to unveil their new for 2017 livery this week when David Reynolds and Dale Wood took the wraps off their new Holden Commodores in Melbourne.

David Reynolds will be in charge of the #9 Holden, which featured refreshed graphics, while his teammate, Dale Wood proudly displayed his #99 Commodore with an eye-catching new look.

“Lots of new things this year, new team, new car and new number; I think #99 has a nice ring to it,” Wood said. “So far so good, everything is feeling nice and comfortable and I’m looking forward to kicking the year off. I’m excited to get into a new car, it is different to the previous Holden’s, but as quickly as I can adjust to that the better we’ll be.”

“We spend a lot of time together throughout the season and it’s also important to be comfortable with the team around you, it’s been really good and I’ve been lucky enough to have spent a fair bit of time with my crew already.”

Reynolds also said he was looking forward to a new season, his second year with the team…

“We finished last year with really good momentum so I’m really excited for what’s to come,” Reynolds said. “The boys have built me a new car and it’s special because it’s a new chapter in our story. I’m really looking forward to our first test day next week, it’s the first time in my entire career that I’ve had a new chassis, so I’m looking forward to driving something new.”