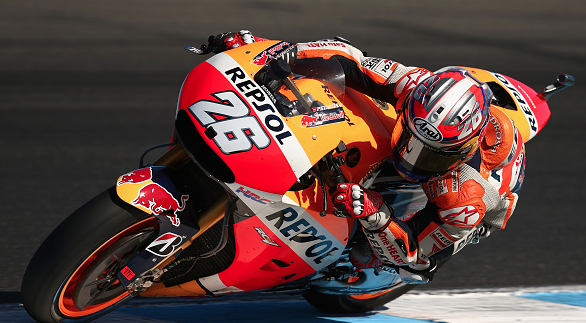 Spain's Dani Pedrosa seized his first pole of the 2015 season in dry track conditions ahead of Sunday’s Malaysian MotoGP, after a fierce battle with his Honda teammate and defending world champion Marc Marquez.

Pedrosa rocketed his Honda bike around the 5.5 kilometre (3.4 mile) Sepang circuit in a fastest ever lap time of one minute 59.053 seconds in Saturday qualifying, 0.409 seconds ahead of Marquez.

In third place was veteran rider and championship leader Valentino Rossi, who will start in the front row ahead of his Yamaha teammate and old rival, Spaniard Jorge Lorenzo.

Lorenzo, 28, had dominated Friday’s practice, but qualified in fourth and will start in the second row along with Honda’s Cal Crutchlow and Ducati’s Andrea Iannone.