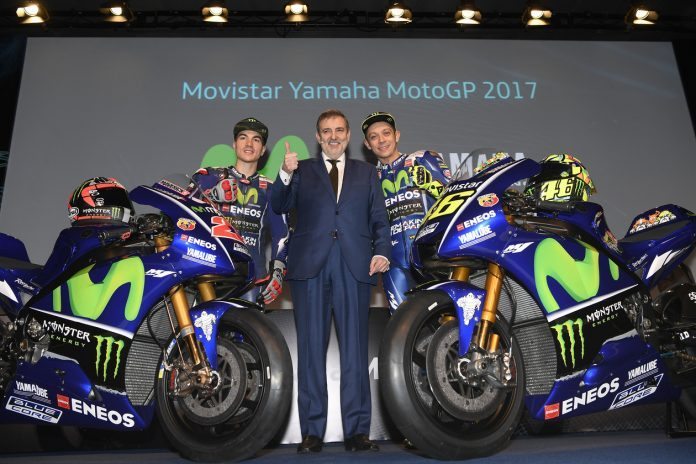 The YZR-M1 was unveiled by Valentino Rossi and Maverick Vinales this morning in Madrid.

The stunning new livery was mainly blue with new much larger green Movistar logo on proud display. The blue, a little darker than last year, looked stunning under lights and the two riders were certainly proud of their new chargers.

Movistar and the Yamaha Team have been together for 4 seasons now and in the past three seasons they have had 21 victories, 71 podiums, 1 world title, Lorenzo in 2015 and 2 team titles and the aim is to score the double in 2017.

Besides the new Movistar logo, the Blue Core logo (Yamaha's new generation engine development designed to extract maximum performance and fuel economy) is added as a new design element on the bike, while the deepened Yamaha blue gives the bike a chic finish.

Further revelations include the new Movistar Yamaha MotoGP Team logo. Its new design is a testament of how much value the team assigns to the Telefónica and Yamaha collaboration and puts the Movistar‘s ’M‘ in a more prominent role.

This sentiment is also reflected in the YZR-M1‘s 2017 livery, which features the new Movistar-logo on either side of the fairing and the front of the bike.

“Over the last three years we have demonstrated that our team is very competitive and our partnership with Movistar has delivered great results on and off the track. Movistar and Yamaha are both brands that have a lot of history in the MotoGP World Championship and we are proud that our collaboration is growing stronger each season,” said Lin Jarvis, Managing Director.

“It therefore seemed no more than fitting to present the 2017 YZR-M1 at the home of Movistar, the Distrito Telefónica in Madrid. The bike‘s striking new livery features cleaner lines, more blue and a very strong Movistar branding on the fairing. We also unveiled the new enhanced Movistar Yamaha MotoGP team logo symbolizing the partnership between our two companies.”

“We see today not only as the official start of the 2017 season but also the start of a next chapter with our exciting new rider line-up; it is a new beginning and so Movistar‘s slogan “We Choose to Make History” is certainly very fitting and one we will strive to live up to. We have Maverick Viñales joining us as he searches for his first MotoGP class title and Valentino Rossi, who has his eyes set on World Championship title number ten.”

“Both are eager to reach their goals and hungry to win races and most of all have good battles at the front of the pack. With their dedication and the commitment of our engineers and team staff, I‘m confident we are in for another exciting and highly competitive season