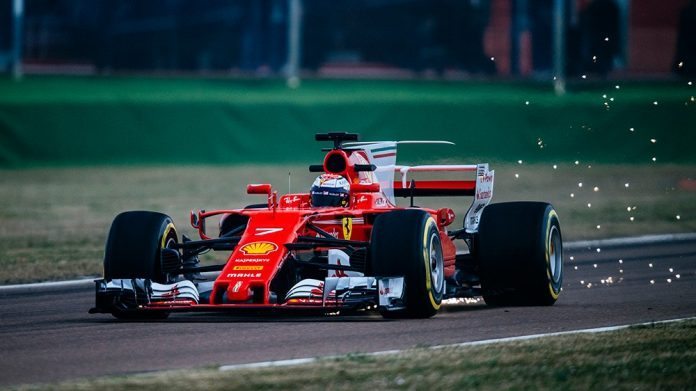 After the launch of the new Ferrari SF70H on Friday, the car built to compete in the 2017 Formula One World Championship, it took its first steps at the historic Fiorano track, combining the shakedown with a filming day to acquire footage for commercial purposes.

The shutters to the Fiorano pit garage, which had been decked out in a unique look just for the day, came up at 9h45 Italian time, watched by the President and CEO of the Prancing Horse Sergio Marchionne, Team Principal Maurizio Arrivabene, Technical Director Mattia Binotto, the drivers Kimi Raikkonen, Sebastian Vettel and Antonio Giovinazzi and all the staff, who were watching the presentation from nearby in the Maranello headquarters.

After the routine preparations, the car drove out of the garage at 11h20, fitted with the “Demo” tyres which have to be used on filming days.

They were to the same larger sizes as this year’s tyres, but the compounds were different. It was certainly a rare sight, seeing a current year model Formula 1 car running on Ferrari’s home track: the rules no longer allow in-season testing, apart from the collective ones for all teams.

The sole exception is in fact the 100 kms allowed for a promotional day, which first Raikkonen and then Vettel made the most of , splitting the allowed distance equally between them, despite the rain which delayed Sebastian’s first run until 15h40.

Once the day’s work was over, all the employees got the chance to see the SF70H up close, before the car was loaded up onto a transporter, ready to head for the Catalunya Circuit, where the first of two pre-season test sessions gets underway on Monday 27th February.

Each session runs for four days. Vettel is due to drive on Monday and Wednesday, with Raikkonen taking over for Tuesday and Thursday. The second test gets underway on Tuesday 7th March.