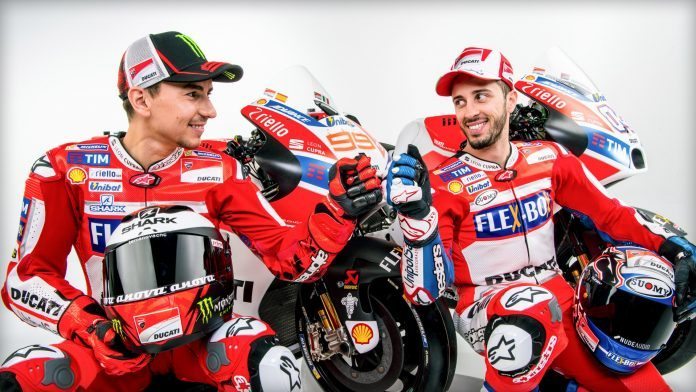 The new Ducati Desmosedici was unveiled on Friday where new signing Jorge Lorenzo was joined by teammate and long-time Ducati rider Andrea Dovizioso in front of the press and prestigious guests in Italy.

Like the new Yamaha, the highly anticipated moment was streamed line online with millions of fans watching in to see the new bike in all its glory.

Luigi Dall'Igna, General Manager of Ducati Corse and the man behind the resurgence of the twam in 2016 that saw their first wins since Casey Stoner left, praised both his riders and is confident of securing strong results in 2017…

“Our organization is better; we’ve improved it a lot and we’ve managed to have the new bike up and running straight after Valencia. We just wanted to make sure the new bike had no problem or issue it would have been impossible to solve during the season. Now, we get underway with our test riders Michele Pirro and Casey Stoner, alongside our official ‘heroes’ – Jorge Lorenzo and Andrea Dovizioso. We have to improve our bike from every perspective and in every detail.”

“This season will be Andrea Dovizioso’s fifth season with us.. We’ve been through some difficult times together but he’s a great rider and I’m sure we can do it. Lorenzo is a five-time World Champion, and the only thing we have left to do is win the World Championship. We don’t need excuses , that’s why we hired Lorenzo. There is no reason why we can’t do this. We’ve changed our mindset and we’re focused on doing what people want us to: winning the Championship.”

The team will take be out on track with both riders at the Sepang International Circuit for the first official test of the year on January 30th. .