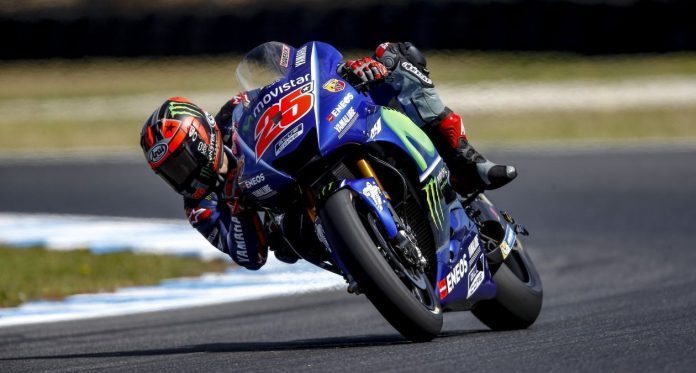 Maverick Vinales topped the second day of testing at the Phillip Island Circuit in Melbourne today, the Yamaha rider almost half a second faster than yesterday’s quickest man, Honda rider Marc Marquez, and the only rider to go under 1:29.

It was a positive second day of testing for us. We used this session to work mainly on the chassis to make comparisons and try different settings,” said Massimo Meregalli, team director. “ We also tried a new front fork with both riders and two new tyres for Michelin. Even if we didn‘t do a race simulation, we completed a lot of laps on used tyres.”

“Today Maverick was more comfortable on his bike compared to yesterday and he has been able to post laps under the 1‘29s mark and set the fastest lap of 1‘28.847s. He followed this up with an impressive pace that he kept going throughout the day. Valentino had a good start this morning and set his best lap.”

“He continued this competitive pace in the morning, but in the afternoon he faced some difficulties, trying different settings that didn‘t give the expected results. We have been able to do almost everything on our scheduled testing programme, so tomorrow will be our race simulation day for both riders.”

Warm and windy conditions prevailed for the second day of action as the 22 riders worked on developments ahead of the opening race of the season in Qatar next month.

Honda’s Dani Pedrosa was ill in the morning session however and only managed to put in a few hours of work in the afternoon, finishing 16th overall behind 15th placed Ducati rider, Jorge Lorenzo.