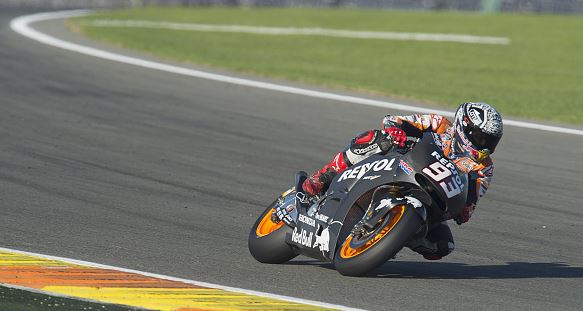 Marc Marquez has ended the two-day test at Valencia on top of the timesheets.

However, the Repsol Honda rider admits that there is still plenty of work to do before the start of the 2016 season.

The Spaniard completed 42 laps on Wednesday and tried out the 2016 engine, but warned against getting ahead of himself at this stage of the season.

"The times and the standings at this test are not important, because we have seen that there is plenty of room for improvement. I think we all have a lot of work ahead of us with the new electronics, because it is very different to what we had before," Marquez said.

"We are trying out many things and the problem is that it is a very slow process to find a good base. After each five-lap stint, you spend a lot of time in the garage waiting to go back out. We also tried the new engine, although there are still many things to setup and we have to first focus on the electronics before studying that properly."

Team Suzuki Ecstar’s Maverick Viñales ended the two days in second, just 0.103s behind Marquez, while Dani Pedrosa (Repsol Honda) was only seventeen-thousandths of a second further back in third.