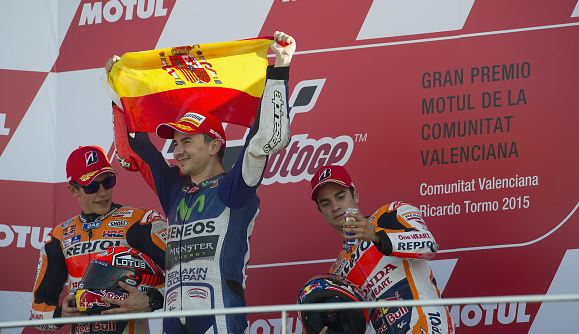 Jorge Lorenzo claimed his third MotoGP world title at the Valencia Grand Prix on Sunday amid acrimony and accusations of collusion from his vanquished Yamaha teammate Valentino Rossi.

Rossi went into the season-closing race seven points clear of Lorenzo, but the Italian legend was left with a Herculean task starting from the back of the grid as punishment for pushing Marc Marquez off his bike in Malaysia.

Rossi surged dramatically through the pack to finish fourth but Lorenzo led from pole to flag, despite intense pressure from his Spanish compatriots, Honda duo Marquez and Dani Pedrosa.