Team Owner Charlie Schwerkolt was also proudly on hand along with the Preston Hire Racing staff and the team’s valued sponsors and supporters.

Holdsworth was ecstatic with the new livery, with the new feature on the colour yellow ensuring the Holden Commodore will look its best every race day.

“It’s great to reveal the car with the team and all of our sponsors,” he said. “The yellow is seriously bright and looks awesome. It won’t be hard to spot the Preston Hire car on track. I’m excited about the Clipsal 500 in just a few weeks after a long off season, we’ve all worked extremely hard to come back as a much stronger force for 2017.”

Holdsworth and Team Manager Jeff Grech are entering their second year with the team and are joined by new Head Engineer Chris Stuckey. 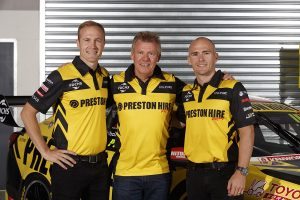 Co-Driver Karl Reindler will also return for his second year with the team for the Enduro’s, after achieving the team’s best result yet at the Gold Coast 600 alongside Holdsworth.