French Formula One driver, Jules Bianchi, who passed away after injuries sustained in the Japanese Grand Prix in 2014, has been honoured in his home town on Nice where a street was named in his honour, ‘Rue Jules Bianchi’. A plaque was also erected with “ Piolte de Formule 1 1989 – 2015”

The street bearing his name is situated near the Riveria Stadium, also celebrating the former racer’s love of football.

'Jules loved football,” his father Phillippe Bianchi has been quoted as saying. “We are delighted with the position, in such a dynamic zone, so full of promise.'

So full of promise, just as Jules was. He was destined to be a Formula One great with strong performances in every discipline of Motor Racing, however his life was tragically cut short when his car went off a very wet Suzuka Circuit, right underneath a crane that was on the side of the circuit retrieving another car which had aquaplaned in the same spot. Jules was in a coma with severe head injuries for nine months before eventually passing away in 2015.

“ Great initiative from Ville de Nice,” tweeted his former manager and friend, Nicolas Todt with the below pic. “Jules will always be in our hearts #JB 17.” 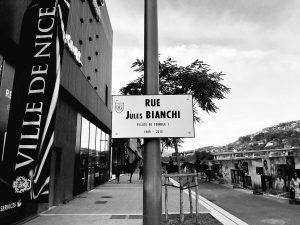