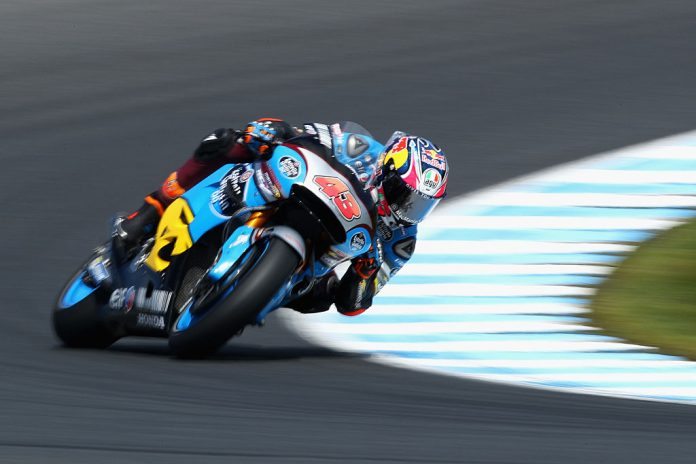 Aussie rider Jack Miller heads to Malaysia with confidence after his top 10 finish after such a strong battle in front of home fans last Sunday. The 21-year-old’s return to the top 10 was the first time  since the German Grand Prix in mid-July, which was also a strong ride coming off the back of his best ever MotoGP qualifying result of fifth.

The 2016 Moto GP Championship may be decided, but that doesn’t mean that the final two races of the season will be any less exciting, starting with this weekend’s Malaysian Grand Prix.

Held at the Sepang International Circuit, the same venue that hosts a round of the Formula One World Championship, riders thrive on the challenges presented by this 5.543-kilometer (3.444-mile), 15-turn circuit.

Ground was broken in November 1997 and the track was officially opened on March 9, 1999, constructed in an astonishing 14 months, It was considered revolutionary at the time, with modern facilities and a unique design. Two massive straights bookended by tight corners are signatures of the track.

It’s a twisting layout that challenges the drivers and their engineers. The track’s width allows for numerous overtaking opportunities, but the incredible speed that can be attained on the straights is actually restricted by the fast, flowing corners.

Frequent and torrential rain storms often impact the Malaysian Grand Prix as its tropical environment and mid-afternoon start time conspire for unwieldly conditions and after the unpredictable weather experienced at Philip Island last weekend, the riders will be hoping that the rain stays away and the heat works to their advantage.

The track has been resurfaced for this weekend’s round, proving another challenge for teams and riders as they attempt to understand how it impacts on the tyres and bike set-up. The layout is also slightly different.

Jack took second place from pole position in the Moto3 category in Malaysia two years ago and now that he is free from injury, the young Aussie rider is optimistic that he can fight for another top 10 finish this Sunday, despite missing the pre season test here early this year...

“I missed the winter test in Malaysia earlier this year but I don’t think it will be a major disadvantage because the track has changed a little and the surface is new,” he said.

“I’m happy there is new asphalt because the track was getting quite bumpy. I’m curious to see how some of the corners have changed but we should be able to figure it all out pretty quickly. Phillip Island was a solid race and hopefully I can have another exciting fight but with a better result.”