The Shanghai International Circuit, built on 5.3 square kilometres of marshland, approximately one hour’s drive from the city centre, was hailed as the race circuit for the new millennium when it debuted in 2004. Designed by the famous Hermann Tilke, who has tracks such as Malaysia Bahrain and Abu Dhabi to his credit, it is one of a number of tracks that is at the leading edge of Formula One race circuit technology.

Complete with seven right and seven left hand corners, the track also boasts several overtaking opportunities, in particular at the multi-apex turn one and at the end of the back straight. The impressive Main Grandstand with its unique "bridge" like structures run at either end of the Main Grandstand and connect across the track with the Pit Building, while the track layout is based on the Chinese character “Shang”, which translates as “high” or “above” and gives Shanghai its name.

The "wings" on the main grandstand are nearly 100 metres in length and house in one end the International Media Centre and in the other there is a restaurant, kitchen, VIP rooms and a balcony that accommodates the Paddock Club facility during the Grand Prix and each "wing" is connected to the Pit Building by a tower. Race distance is 305.256 kilometres or 56 laps, but unusually enough, the longest straight is not the start/finish straight but one which lies between turns 13 and 14. This full throttle section extends to almost 1.2 kilometres and has been the scene of some fantastic racing.

The circuit presents a tough challenge, the opening two corners are very tricky slow tightening turns that can lose a driver a lot of time and can be the deciding factor in setting a quick qualifying lap and it is also very demanding on brakes. The inaugural event in 2004 was won by Ferrari driver Rubens Barrichello while Michael Schumacher was forced to start from the back of the grid due to a spin during the then one lap qualifying session. 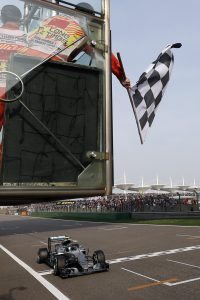 As fierce as his comeback fight was, Michael finished down in twelfth place after an array of errors, however, to this day the seven time world champion still holds the lap record of 1:32.238 set in that opening race.

2005 saw the circuit play host to the season finale and Fernando Alonso took the win and gave Renault their first constructors crown since their return to the sport while the third running saw Michael Schumacher claim the final victory for Ferrari followed home by Fernando Alonso.

2007’s race will always be remembered as the one that saw McLaren rookie Lewis Hamilton throw it all away by making one of the rare mistakes in his debut season, losing the lead to Kimi Raikkonen due to worn Bridgestone tyres as the young Brit did not want to give the lead away by pitting for new rubber. Leaving it just that little bit too long to come in, his McLaren ended up in the gravel on his way in to the pits. In 2008 Hamilton made up for that mistake by taking the win ahead of Ferrari’s Felipe Massa and then teammate Kimi Raikkonen. Since then Lewis has won here a further three times, 2011, 2014, and 2015.

In 2009 the win belonged to Sebastian Vettel when he and teammate Mark Webber gave the Milton Keynes based squad their first ever one two victory and Jenson Button was victorious for McLaren in wet conditions, ahead of Hamilton, who was forced to settle for P2.

Nico Rosberg was victorious here in 2012 and again last year with Fernando Alonso filling in the missing victory in  2013..

Pole position here is on the racing line, on the left side of the track, but the grid advantage is negligible. Last year Daniel Ricciardo, who started second in his Red Bull, beat pole-sitter Nico Rosberg into turn 1 off the line.

There are two DRS zones here on the approaches to turns one and 14. The latter is the longest DRS zone and the most likely overtaking point because the cars slow for a 50km/h (31mph) hairpin, so hopefully some of the overtaking that was lacking in the season opener in Melbourne ten days ago will happen here this weekend.

The likelihood of a safety car at this event is 45 percent, which is a relatively high probability. Historically there are a lot of collisions at this racetrack, particularly at turn 1, and the result is invariably the appearance of the Safety Car. In fact, back in 2015 the race finished under Safety Car conditions after Max Verstappen’s Toro Rosso was left stranded on the start-finish straight following a transmission failure.

That said, drivers will need to watch out for the large bump on pit straight, especially if it’s wet. During last year’s qualifying session a combination of this bump and a damp patch under a bridge caught out Pascal Wehrlein, who spun and hit the barrier. Sadly, Pascal has now ruled himself out of this year’s race so the chances of him repeating this error are zero.

Speaking of weather, that factor definitely needs to be considered as drivers go about their weekend. However, even though the race is one week earlier than last year, the temperature is still expected to be similar. The forecast at this stage is for a dry race weekend, with the ambient temperature expected to peak at 21 degrees.

If you were a betting person, Sebastian Vettel and Ferrari would be favourites to win again here this weekend, especially after their strong showing in Australia, however, you can never discount the Mercedes of Lewis Hamilton, who, for this round especially, will be looking to make up for losing the victory to the German at Albert Park and with four victories here already, his odds will be very short indeed. 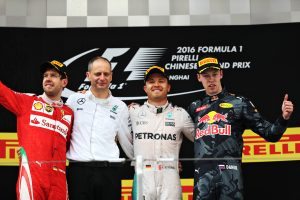 For all the facts and figures on the Shanghai International circuit, look here.