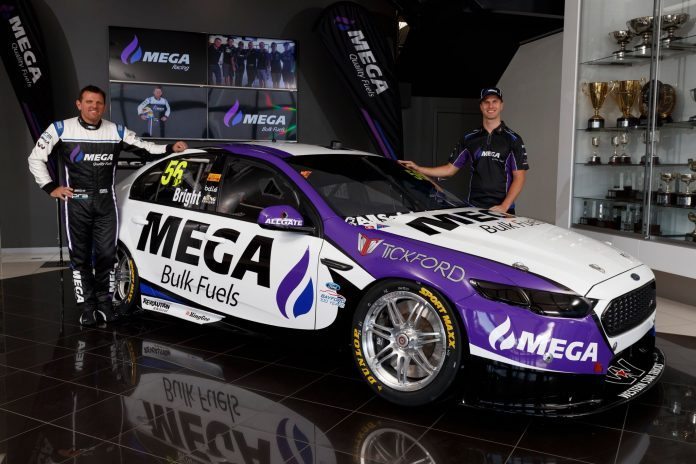 As the new MEGA Racing Ford was unveiled in front of fans and the media in Melbourne this morning, it was also confirmed that Garry Jacobson will co drive with Jason Bright for the 2017  Enduro Cup.

Jacobson, who experienced one of the team's main-series FG X Fords in a co-driver test session at Queensland Raceway in 2016, is thrilled by the opportunity to share such an important role with Brighty.

"It's an honour to be given the opportunity to drive alongside Brighty in the Supercars main series as a co-driver," said Jacobson. "It's exciting for me to gain even more experience in these cars and it shows that the team and Tim trust in my ability and trust that I can do the job on the day. It was awesome to meet everyone from MEGA Limited today. As a brand they certainly have a lot to give and I'm proud to associate myself with them as their co-driver this year."

MEGA is pleased to see the partnership come to life on the car as supplying fuels to the wholesale and remote industrial markets, they will move into a new market in 2017.

"We have big plans in place as the new name in the petroleum industry and this sponsorship works well alongside the programs that we have coming on board soon. We supply to remote industries across the country so working with a nationwide sporting code is extremely beneficial for us,” MEGA Limited National Motorsport Manager Terry Knight said. "We can't wait for the Supercars season to get started and to continue growing our relationship with Prodrive Racing and the sport."

Jason Bright will debut the MEGA Fuels livery at the team's test day on February 21.