Red Bull Racing’s Aussie Formula One driver, Daniel Ricciardo, has taken on a role of a different kind after being named as global brand ambassador for carsales.com.au, the same company that sponsors Nissan in the Australian Supercars series.

“As one of Australia’s leading sportspeople and personalities, Daniel appeals to a very broad demographic and is viewed as an authentic, relaxed and approachable leader – traits we align with our own business,” said carsales CMO Kellie Cordner.

“His natural charm and Australian roots, not to mention his clear commitment to success, speed and innovation, are all things we see as congruent with our own company and something we want to harness through the personalities we align ourselves with.”

Daniel’s new role will see him help car buyers, and sellers, through his own passion for cars and driving and he is thrilled to be aligning with another Aussie success story.

“Although my racing career has taken me all over the world it is a great feeling to be aligning myself with such a strong Australian company and brand in 2017 – and one that is the clear leader in its industry,” he said.

Carsales will feature on the chin strap of Daniel’s helmet and on each side of his cap this season and the F1 ace will star in commercials due to hit Aussie screens during the season opening Australian Grand Prix next month.

“I really admire the success carsales has had in Australia and more recently at an international level. It’s for these reasons that this ambassador role feels like a very natural fit for me. I will be very proud to race with the carsales brand on my helmet and cap across the 2017 season.” 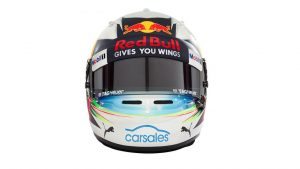