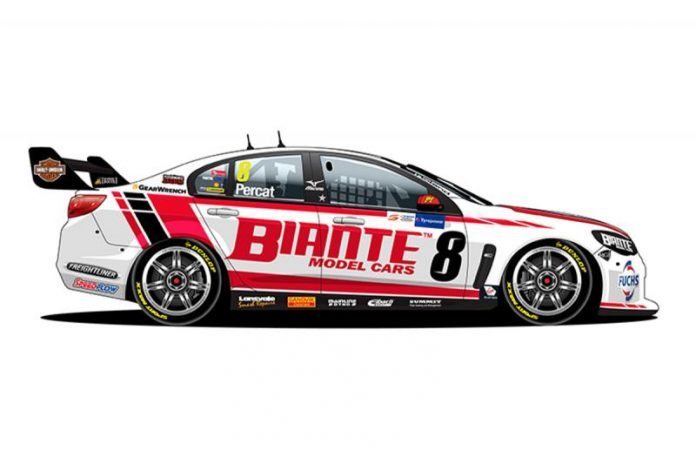 The next round of the Supercars Championship will take place at Symmons Plains in Tasmania next weekend and for Nick Percat’s Brad Jones Racing Holden VF Commodore will be sporting a brand new first time ever in the series, Biante designed and branded livery.

Biante Model Cars have had a long association supporting and producing collectable scale models for the team, but this will be the first time they will compete in the full branding.

Biante Model Cars have fantastic relationships with many teams up and down pit lane in the Supercars Championship with our model program. Our ties with Brad, Kim and the team at BJR have always been very strong so it's thrilling to have this opportunity to have a full livery at a championship round," said William Hall, General Manager of Biante Model Cars.

“We’ve had an association with Biante for over 20 years and it’s fantastic that they are taking up this opportunity to be the naming rights sponsor at Tasmania,” Team Owner Kim Jones added. There is a strong model car collectors group in Australia and the drivers, Brad and I get to meet many of them through the Biante Collectors Nights. The #8 Biante car is going to look sensational on track and I’ll definitely be adding one of these BJR Biante Model cars to my collection.”

After suffering with brake failure in spectacular style at turn one at the Australian Grand Prix, leaving the car badly damaged and withdrawn from the event, Nick Percat is aiming for a change of fortunes in Tasmania with Biante on board…

"We had some bad luck at the AGP with the brake failure but the team have done an outstanding job getting the car back into shape and the Biante livery looks awesome, would make a pretty good model I reckon!"