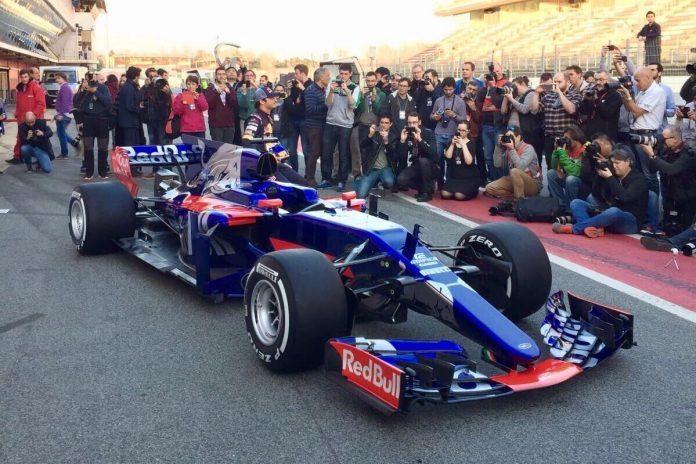 The Scuderia Toro Rosso team’s Deputy Technical Director, Ben Waterhouse, has overseen the teams’ 2017 Formula One contender, the STR12, right from the start.

Here he gives an overview of how the new car was conceived and born….

The STR12 Project was kicked off very early in November 2015. We set out to make it the best STR engineered car to date, as we knew we had to adopt a back to basics approach to apply our existing knowledge of what makes a fast race car to a new set of regulations and constraints. We also recognized that with the major changes we had to ensure that by the time the season started we were as prepared as possible and had done our homework, meaning all rig testing and component sign-offs were completed. So this was integrated into our plan from the start.

Starting at the end of 2015, before STR11 was even completed, we were in a situation where the regulations were not clear and there were many unknowns. However, it was clear the cars would be wider, the mechanical grip from the tyres would increase and that the cars would have significantly more downforce and drag.

At this early stage the focus was on the Aero and Vehicle Performance groups to understand the sensitivities of these factors. We began by preparing best estimates of the extra grip/downforce/drag that the new regulations would bring and started to estimate the performance envelope of the new cars using our simulation tools. As there were many  unknowns we intentionally scanned a range of any individual parameter to derive a number of different permutations and "what if" scenarios. These results then fed into other groups to define their processes, as well as going back into the Aero and Vehicle Performance groups to refine their own work.

In parallel to these initial studies the first car concept schemes were laid out by the Concept Group. Some of this work was independent of the revised regulations, but factors such as considering the additional weight and aero preferences had a very strong influence. Other design factors, such as load cases, also have major implications on the structural requirements.

As a consequence, the process is iterative and the output of the simulation work very much feeds into the design concept. For example the increased performance leads to increased loads, which must then be considered in the concept we adopt for the gearbox or suspension design. Similarly, the lap simulations determine an optimum aerodynamic efficiency for each circuit and for the season as a whole, which can shift the aero development targets and likewise for the tyres. As more understanding was obtained and our knowledge increased, so the targets were refined and as a team we were then working towards a more focused goal.

This process evolved; each iteration a refinement and closer to what we have on track now, as more information became available or was better understood.

Possibly the biggest unknown of the entire regulation change concerns the tyres. The tyre information we use has been slowly maturing from our own internal estimates of how a wider version of the 2016 tyre would behave, through to a final set of data measured by Pirelli on a 2017 race spec tyre in December. With each iteration of simulation we moved a step closer in terms of accuracy of the aero performance, mechanical behaviour and tyre performance, so that now we are reasonably confident we can predict how the car will respond when we start testing in Barcelona.

Moving back to the design aspects, in the initial stages the design was prepared by the concept group, trying to optimize the layout of the car to maximize performance. By the summer break we had a well defined view of the car layout, however this still required significant engineering work and it was around this time that the design office switched from performing individual studies on the new car, to really delving into the detail to ensure the car concept was realised as effectively as possible.

Of course, we had to leave enough time for everything to be manufactured. We now have an excellent production capability in-house. From a planning perspective, we knew what our lead times were. Chassis release, for instance, was some time in the autumn with final components not released until middle of February. Everything comes together very, very quickly towards the end. With only eight days of winter testing, we wanted to ensure that we’d done as much homework as possible before the first test. We actually had a very, very intense sort of test period, which started week five, week six, and we’ve had the car being fully utilised for the last three weeks before it goes to the first test. We ran a very intense validation period over the past weeks, looking at the power unit installation, the kinematics and compliances of the car, working on the seven post rig which tests ride performance and then finally, we had our filming day to get a final validation before track testing.

The enormous change in regulation has required us to take a very thorough approach to understanding what drives the performance of these cars. We have faced some significant challenges, which forced us to take a more engineering-led approach to the design of the car. Now the real challenge begins on the development side. With the introduction of new regulations our expectation is that the grid will spread out. Certainly some teams will get the car more "right" than others. However regardless of this, the rate of development of the new regulations will continue to be very steep. As a consequence we don't expect to see the same pecking order at the end of the season as at the start and that's going to be dictated by the development war.

We have already planned a very aggressive programme for the coming season. It's been a tough project up until now, but I believe the development war is going to be intense and it's from now that the real battle will take place back in the teams’ factories.