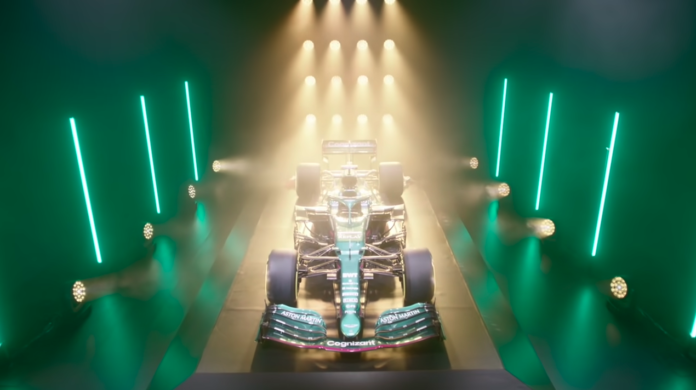 Ever since the announcement that Aston Martin would be returning to Formula One, fans and followers of had been eagerly anticipating the unveiling of their new car. Lawrence Stroll and his team didn’t disappoint, presenting the AMR21 at an event packed with nostalgia and surprise appearances, heralding a new and exciting era within Formula One.

Taste of things to come

Live-streamed online and with more than 100,000 viewers on YouTube alone, by the time former Bond girl Gemma Arterton appeared on our screens, everyone knew this presentation was going to be special. When the Union Jack was finally removed from the AMR21 by Sebastien Vettel and Lance Stroll, the reveal brought a jaw-dropping first look at the stunning new car they will be driving.

Albeit with a dash of pink trimmings, traditional Aston Martin green livery was exactly what everyone had hoped to see. What’s more, the design itself certainly gives the impression of a machine built for F1 success. After the unveiling, there was a surprise appearance by NFL superstar Tom Brady, who is apparently a huge F1 fan. Then positive words from Daniel Craig, James Bond himself, as the icing on the cake of a spectacular Aston Martin event.

Prominent throughout was billionaire team leader, Lawrence Stroll, who has invested heavily to make the Aston Martin Cognizant F1 Team a reality. Everyone has waited a long time for this, especially since the last F1 race for the manufacturer was at the 1960 British Grand Prix. Now they are back, technical director Andrew Green promises the team will be innovative leaders, pushing the envelope each year to improve.

Stroll certainly has high ambitions for the team, confident they should be challenging for third position in the Constructors’ Championship this year. Looking at the latest Aston Martin F1 betting odds they are priced at 66/1 for the title, way behind Mercedes as the outright 1/6 favourites. Breaking into the top three will be just as tough, yet not entirely impossible, challenging the likes of Red Bull at 7/2 and Ferrari at 14/1 odds.

Now you’ve showed the car some love… how about these two? 💚 #AMR21 #IAMF1 pic.twitter.com/a2QdFuHwpL

Nevertheless, while Stroll clearly wants the team to make an immediate impact, the Aston Martin supremo is a little more realistic when it comes to long-term vision. He genuinely believes that within three to five years, they should be capable of seriously challenging for the Constructors’ title. That will obviously require consistent innovation and improvement, which Stroll has underlined as being the key reasons for Aston Martin returning to F1.

Providing the Aston Martin AMR21 car is reliable mechanically throughout the season, the biggest boost for their chances will be having Vettel behind the wheel. Having won the World Drivers’ Championship winner four times, he probably wouldn’t have joined if team ambitions didn’t match his own. The German will be eager to get plenty of podium finishes, and with the enthusiasm shown at being part of this project, he will push this car to its limits.

Tension Between Verstappen and Hamilton Begins to Intensify