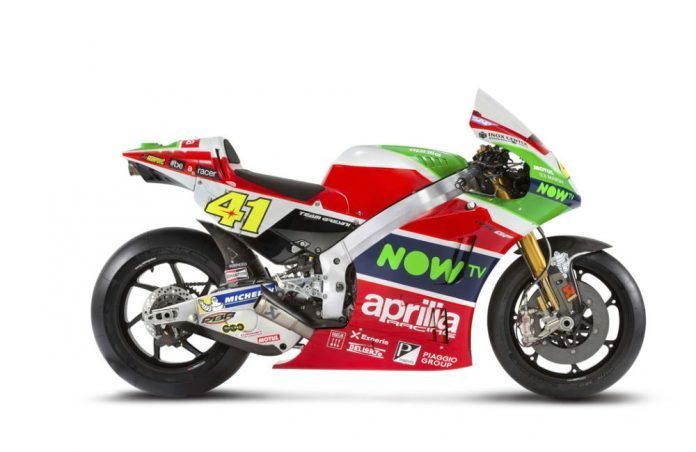 With two new riders, Aleix Espargarò and Sam Lowes and the new 2017 RS-GP, which is more powerful and technologically advanced, Aprilia are aremed and ready for the upcoming MotoGP season.

The new red, white and green livery designed by Aldo Drudi celebrates a fiercely proud, all-Italian project and just as they advcanced during recent testing, the plan is to advance even further throughout 2017.

Last year the RS-GP made its début in the Doha tests, the first MotoGP bike developed entirely by Aprilia Racing to compete in the premier class of Grand Prix Motorcycle Racing. Just twelve months later, the all-Italian project must now face an important final exam: the constant progress demonstrated in the first season, with 16 Top-10 finishes, was reconfirmed during the tests in Valencia, Jerez, Sepang and Phillip Island.

Aleix Espargarò, a welcome returnee to the Aprilia camp, immediately found the right feeling with his RS-GP, especially in terms of braking stability. The Spanish rider was also able to test the 2017 evolution of the Italian MotoGP bike, approving of the progress made compared with the 2016 version and demonstrating encouraging competitiveness during the official tests.

Sam Lowes, on the other hand, could not help but have a different task than his teammate's. The talented English rider must first of all become familiar with a prototype that is very different from the Moto2 bike he has ridden in the past, both strictly in terms of performance and in terms of the riding style it requires. The progress demonstrated during the tests led to reducing the gap behind the best in the category and, much more importantly, improving his sensations in the saddle.

"For us, 2017 begins with a different situation compared with last year,” said Romano Albesiano - Aprilia Racing Manager. “We already know that we have a bike, the RS-GP, which has reached a good competitive level. The evolutions that we studied and applied in view of the new season concern every aspect of the bike, from its weight, which has been optimised, to overall balance, not to mention engine performance and the electronics package. An all-around operation but without any drastic changes, given the good starting base, with which we want to take another step toward the goals set for the Aprilia MotoGP project.”

“The initial feedback has been encouraging. Aleix likes the new bike and has some rather clear ideas on which characteristics have the most room for improvement, so we will be working in those areas throughout the season. The racing department put in a lot of effort during the winter break. Everyone understands the importance of the challenge we are facing and our front fairing is just the most visible example of Aprilia's dedication to innovation. During the tests we stayed in a group of very competitive bikes and riders, where just a few tenths of a second can make a big difference. Our goal, after showing that we can consistently battle for the Top-10, is to improve further."