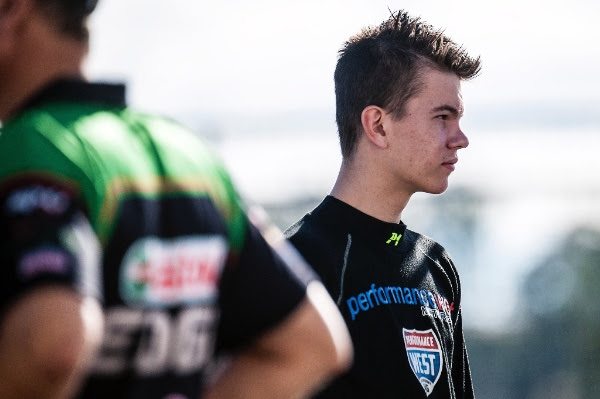 New Lucas Dumbrell Motorsport signing, Alex Rullo, had his first taste of the car he will be racing in the 2017 Supercar Championship at test day at the Winton Raceway yesterday.

Despite a minor off early in the running that caused a short delay for the team, it didn’t hamper the youngster from getting through the busy test schedule for the day.
LDM were eager to conduct a Rookie Test Day prior to the official Supercars test at Sydney Motorsport Park, set for the 21st February.

“There are areas we would like to improve on, but over all, it was really good just to get back into the car and have a steer after a 3 month break,” admitted Rullo. “I’m looking forward to the Sydney test and seeing what the new Supercars tyre compound is capable of and getting more laps in the car.”

The day also marked the first time the 16 year old was able to work with new engineer Tim Newton, who re-joins the Supercar Championship after a two-year absence, and was most recently employed with engineering firm, Premcar.

Tim has amassed an impressive resume after working with the likes of Russell Ingall, Tim Slade, Renee Gracie, Dean Fiore and Paul Morris just to name but a few, and now looks forward to working alongside Perth’s schoolboy, Alex Rullo.

“I think he has a lot of potential and I’m eager on working with him and getting the most out of him this year,” said Newton. “Overall, the test went quite well but there are still many areas where improvement can be made.”

“We covered a lot of territory and that’s what this test day was for. We had a few hiccups here and there and were unable to test on a soft set of tyres in the end, but we got where we wanted to be at the end of the day. Today was all about making sure that the cars mechanically ran well and that the team and drivers are all comfortable and are working well together.”

After last year, having a full – time engineer is essential to young Rullo’s progression and looks forward to building a solid relationship with Tim.

“We are starting to build a really good relationship and I’m looking forward to working with Tim for the rest of the racing year,” Rullo stated.